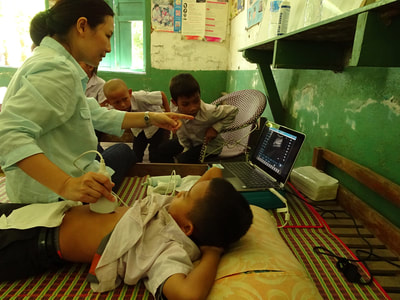 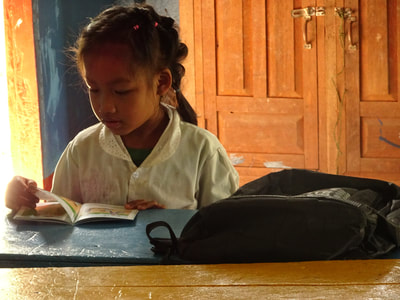 Doctors on the island!

When almost one year ago I discovered a little girl, who suffered from kidney stones and tried my best to save her, I realised that healthcare in Southern Laos is almost non-existent and that in fact the children on the Four Thousand islands have never seen a doctor. Since then, my dream was to bring a doctor to Don Khon island to examine all the kids.

I wrote a concept paper, talked to a chief of the village and a local shaman to check if he would let me use the old hospital and went back to Europe to look for doctors, which turned to be really difficult. I contacted several organisations, all friends and acquaintances who could have relevant contacts, but nobody was ready to come. One team of Thai doctors even agreed but then cancelled. When I was almost desperate, Dr Phuc - the one who cured the Little Girl - rearranged his plans, and together with an ultrasound doctor, an interpreter, an ENT (ear-nose-throat) examiner and a nurse, as well as equipment and medicines came to Don Khon.

While at the beginning things were a bit chaotic, rather quickly we got organized. Knowing all the children, I was picking them from schools, class by class and bringing to the hospital. My task also included weighting them and placing in a queue. Then the children proceeded one by one for the initial consultation. Those assessed healthy could go back to school whereas the others were directed for following tests, be it ultrasound, ear-nose-troat examination or taking urine of blood samples. At the end Dr Phuc was receiving the children again to make the final assessment and give correct medicines.

While the examinations were on-going, news about the doctors’ visit spread across the island. So when the school lunch break started, the elderly, mothers with babies and all the locals with some pains rushed into the room. The doctors proceeded with screening of unexpected patients. For most of them, it was the only chance to seek medical help.

During two days of their stay on the island, the doctors managed to examine all the pupils from the two primary and one secondary school, roughly around 500 children. The Little Girl needs continuous monitoring, two other girls were diagnosed with heart problems and 50% of children below 10 years old with chronic infections of tonsils or middle ear needing surgery intervention. Almost 20% of children, mostly girls did not have underwear, putting them at risk of various diseases.

At the end of my stay on the island, I travelled to Vientiane to visit Dr Phuc’s clinic and discuss the most urgent follow up, notably arranging visits of the three girls for further tests. Also, Dr Phuc prepared additional package of medicines with instructions for parents and teachers of the identified students in need, which I shipped to the island.

Lao people drink very little water.  Clean, bottled water is expensive and water from the rivers or rainwater needs to be at least boiled, which requires time. Additionally in the remote areas, to cook water one needs to collect wood for fire, which in turn increases risk of snake and spider bites as well as burning down the household. And in global terms, boiling water leads to deforestation and has a negative environmental impact.

Lao people also believe that drinking water is not healthy as water contains minerals, which they think leads to kidney stones. In fact it is exactly opposite. The Little Girl recreates kidney stones because she does not drink enough. Dr Phuc already last year told me she needs to drink more. Water is a fundamental human need. The importance of clean drinking water cannot be overstated when it comes to preventing infection, illness and even death.So when I learnt that the family of the Little Girl drinks water from the Mekong river (where people as well as oxen wash themselves, where trash is being thrown away), I could not believe it and therefore started to look for ways to increase access to clean water. A colleague of mine directed me to a water filter project in Tanzania. Based on simple technique of mixing clay and colloidal silver, a water filter ensures that only clean water passes through. However, I could not imagine transporting these filters from Africa to Laos, therefore when I discovered that the same technique is used to produce very similar filters by Terra Clear – a social enterprise located on my way to Don Khon, I was extremely happy and decided to give it a try. Having initially contacted the company from Europe, I stopped by when in Laos to visit the production site. I was guided around by a young Lao sales person, who explained me different types of clay, production process: forming, burning, checking the filters, adding colloidal silver, creating the supports in a nearby village, as well how to sue and maintain the fileters. I decided to buy two to test the community reaction.

I offered one to the family of the Little Girl. The father came to pick it up with a wooden cart to transport it. I put up the filter at the side of a living room next to the fridge and the kitchen entrance. Then I went with the father to fill up the bottle with rainwater, which the family collects in the huge porcelain jugs. While water was being filtered, I tried to explained how to use and maintain the filter and told the mother that she should also cook food with the filtered water. Each filter can clean 36 litres a day,  it should be enough for the family and even friends. In fact the next day I saw the Little Girl’s friends who were visiting also helping themselves and drinking clean water. As it was very hot, the girls filled up their glasses very often. The Little Girl also served a glass to her younger brother. The easy access to the water filter fountain made, what I dreamt of, happen -  that the family would drink more clean water and be healthier.

I offered another filter to the school on Don Een. Children were surprised seeing brown water taken from the Mekong river turning crystal clear.  It is equally important that kids have access to fresh water when studying.

Therefore, should I secure enough funds, I would like to invest in filters and offer them to all schools as well as to the poorest families, who cannot afford buying clean water in bottles.

The ultrasound doctor discovered during the examination that around 20% of girls do not have underwear, which not only increases risk of urinary and genital infections given that they all wear skits and run around the dusty paths, but also impacts girls confidence. This is in particular the case for girls in the secondary schools.

It came to me as a shock that so many girls walk without pants, so I used the opportunity when going to the mainland to say goodbye to the doctors, to pass by the local market and bought over 150 pieces of underwear.

On Monday morning, after pulling up the flag ceremony, the director of primary school ordered boys to go back to the classrooms and I was left alone with almost hundred small girls starring at me. I gave a small lecture about hygiene and importance of wearing clean underwear and started distributing the panties. At first girls were very shy to get closer, but seeing colourful undies with princesses on them, they quickly formed a queue. The entire operation lasted quite a while and we all laughed a lot choosing colours and sizes.

Then I went to the secondary school and talked to female teachers. These went and discretely took those girls from the classroom, who did not have underwear and directed them to teachers' room, where I was waiting with panties. I was truly amazed how many girls came. I even did not have enough. Therefore before leaving I left some money to a friend, who regularly goes to the mainland and he bought more underwear and gave them to the female teacher from the secondary school. I also used the opportunity when sending the box with medicines from Vientiane to fill it up with additional pieces. With this, I hope that no girl on the Don Khon island will walk without underwear.

Education is the passport for the future

My project started with education and this still remains my main focus. It is only through learning and developing skills of critical thinking that these children can build resilience to risk of poverty, trafficking and change their own future.

But in the same time, given that this region of Laos is a negative priority for the central government, there are not enough teachers willing to come and work there. Those, who do usually are not the most skilled, given that the most ambitious ones head up north. Therefore it is so important to motivate both the kids and the teachers.I always try to lead the classes in a very energetic and creative manner also to show the teachers, how great the engagement and reaction of kids can be if one offers them attention and puts some efforts into leading a class.

For me personally this is one of the most satisfactory part of the project, seeing the kids’ eyes brightening up, seeing them focussed and concentrated when reading and realising how much they enjoy learning. And to be honest it is through the trust gained with these children, that I managed to become part of the adult community of these islands and scale up the project in the way I did.