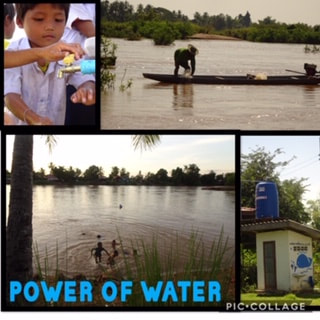 Water, a source of life.

The mighty Mekong river is the main source of life for the communities living on the islands floating on it. It allows for fishing  but is also home to frogs, snails, crabs and other aquatic species that are caught to feed the families living on the islands. Lao people rely on the Mekong for the supply of daily water for drinking, cooking, washing clothes and taking a bath. Unfortunately, the Mekong is more and more polluted and if not managed well, instead of being source of life, may pose a huge risk for health.  Even if boiled (which is a lengthily process and brings risk of snake bites, when collecting wood for the fire) water from the river is never perfectly safe and despite many taking this boiling precaution, preventable illness from drinking contaminated water is still a leading cause of death for children under five.

Therefore, having tested before the use of water filters both at schools as well as in households, I decided to buy 25 more filters and distribute  them to the families living in the poorest village on Don Khon island – Ban Nok. The chief of the village was waiting with a list of beneficiaries to whom I could explain how to use the filters and distribute them. The families were very happy. Some carried them home on their backs, others put them on the boats. The day after the distribution, I visited the chosen families to see the filters in use. But I also realised that many more families were left with no filters and are waiting for access to clean water , which would make a difference to them as well , that would diminish substantively risk of diseases and even death and improve their living conditions.

I also brought one filter to the little island Don Puay, where I was about to open a new bathroom. I arrived early in the morning to start with a class on importance of hands washing and drinking of clean water.  Then I installed the filter and asked a small girl to read to the class the leaflet that explained how it works. Later on I moved with the kids outside and started painting the new bathroom. The kids were truly enchanted when a blue dolphin appeared above the water sink. They formed a queue and we started the ceremony of washing hands. The kids splashed water around passing among each other soap and then were running after each other letting the warm breeze to dry their hands. It was really heartwarming seeing them laugh. We also filled up the filter with water and I could leave knowing that the next morning they will have enough fresh water to drink when studying.

The dangers of water

Life on the Lao islands turns around the Mekong river. The Mekong is not only the source of life,  but also poses great risks. The current in the river is very strong and nearby there are plenty of powerful waterfalls. Most people, even if enter the river daily, cannot swim. Each year boats capsize and several people get taken by the current and lose their lives in the waterfall.  Each year, several children playing around get too close to the current and can't come back and drown.

Finally, the Mekong is also a primary source of income for Lao government that has been investing heavily in hydropower dams all along the river. Few year ago, the government signed also a contract with Mega First Corporation Berhad from Malaysia to build next to on Don Khon a hydropower dam to be able to sell the energy to neighbouring Thailand and Cambodia. Despite that the project that was assessed negatively by the International Mekong Commission, the construction of the Don Sahong Dam began in January 2016. The dam will block the main channel passable year-round by fish migrating between Cambodia, Laos and Thailand, threatening vital subsistence and commercial fisheries in the Lower Mekong Basin. Next to land expropriations with no compensation, the construction of the dam poses a risk to ecosystem, in particular as it threatens vital Mekong River fisheries and the area's biological wealth, and undermines food security and the region’s fishery and tourism-based economy, endangering the main sources of income for the local community. Further,  it also means a huge risk of flood.

In late July, heavy rainfall resulting from the Tropical Storm Son Tinh led to an overflow of the Xepian- Xenamnoy hydropower dam in  neighbouring Sanamxay District of Attapeu Province and caused a flash flood affecting eight villages located downstream of the river. The floodwater inundated roads and destroyed key infrastructure, including the main bridge connecting Attapeu and Sanamxay. According to the United Nations, on 23 August, 13 100 people have been affected of which 4 270 people have been displaced to 11 evacuation camps and 40 people killed (source: DG ECHO Crisis Report n°3).

Taking all this into account, as well as remembering my research on drowning done for Save the Children in Thailand, I decided to organise a swimming class as learning how to swim is one of life’s most valuable skills, and not only for the benefit of water safety. I bought some pool material in Bangkok and took the Little Girl to a swimming pool built last year in a luxury resort for tourists. She was delighted to enter into clean water even if it was not easy for her to properly swim. I spent 2 hours teaching Little Girl how to put her head under the water and dive to pick up sinking toys. I gave her kick-board and tried hard to teach her swim breast stroke. She had it very difficult to coordinate movements of arms and legs, but at the end she was able to get across the entire pool.  We played throwing  a ball, splashing water and drawing attention of all the tourist around. The Little Girl was so happy that her smile moved everyone. It was a really amazing experience and I hope it will help her to be more resilient to dangers of the Mekong river.

Having treated the Little Girl from kidney stones and Noy's from cancer and following the visit on the islands two years ago, Dr Phuc dreamt about opening a clinic on the South of the country. And after lot's of efforts, in July the New Life Clinic in Pakse was opened. It looks so modern, so professional, is so clean and is only 140 km away from the island. Pakse is the only city, which is on my way to the islands. I always stop there to run all administrative errands, including making bank transfers and changing money. This time I stayed a bit longer to visit the clinic. The father of Little Girl brought her as well so the doctors could examine her kidneys. The analysis shown the two tiny stones got smaller so the girl does not need any operation, but just to continue taking medicines that help cleaning the kidneys. In the same time, Little Girl's father suffered from unhealed wound from a dog bite. Dr Phuc suspected another underlying problem and having done blood test, he diagnosed him with diabetes. Little Girl stayed with me one day more in Pakse, so I could take her to market to buy some school materials, new shoes and clothes. She was so excited shopping in a big city :)

Once back on the island, I visited Noy - a 22 years old girl, who was diagnosed last year with a cancer and had to be operated to remove a tumor from her arm, went through 6 chemotherapy cycles and spent over a month in Vietnam to undergo a consolidation radiotherapy. Noy has been very brave and she went through the treatment with a lot of courage. She still wears a wig, but her hair is slowly growing back and what is most important she is getting well. She will go back to University already in January. Noy's family was extremely grateful for saving her daughter. Her mum left in the morning to the temple and returned with a lucky bracelet that she wrapped up around my wrist.

When on the island, I wondered around and visited befriended families and popped to all the schools to greet th ekids and teachers. That is how I saw that a small school on Don Khon is falling apart and will need a reconstruction. The school director has asked me for help so I  have already left  some funds to allow the works begin. But more resources may be needed…