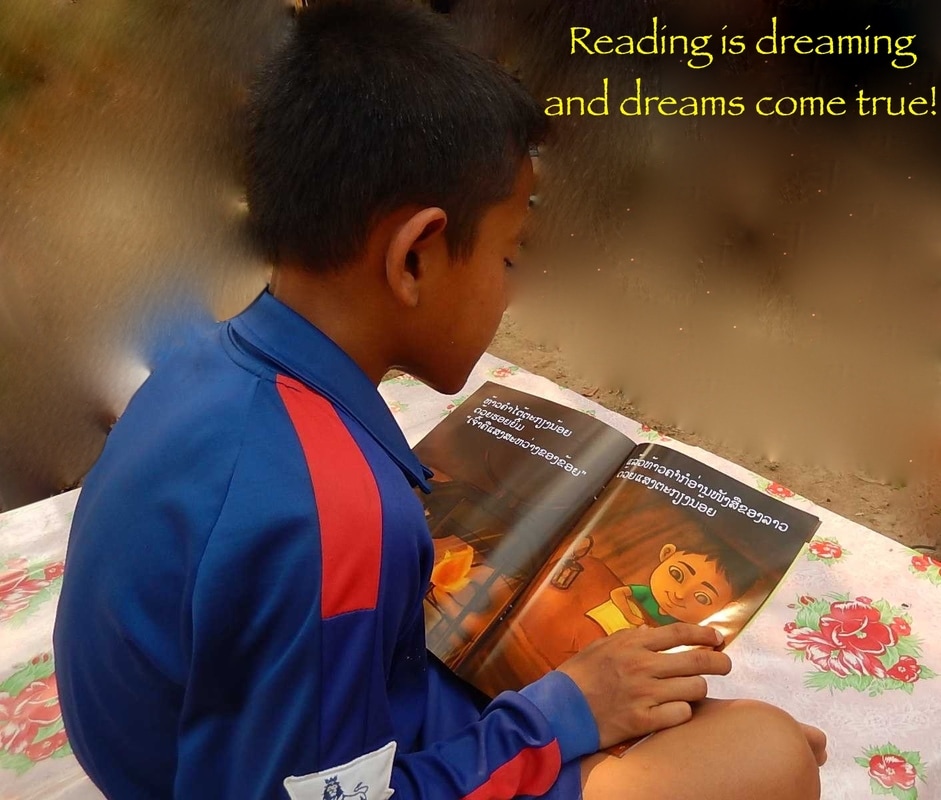 Reading is a basic skill - a cornerstone for a success in school, personal fulfillment and chance to get a job that allows having proper standard of life.  Reading is a means of language acquisition, of communication, and of sharing information and ideas. That is why since 2016 I have put emphasis on the on building children's resilience through the literacy boost. Having set up six bathrooms, I decided to multiply the libraries with books and smart games to enhance numeracy, literacy, creative and critical thinking.  Building on a success of the first library with English and Lao quality books, dictionaries and  smart games , which brought so many smiles but also served as an educational stimulation with special focus on foundation skills for literacy, mathematics, critical and creative thinking of young children on Don Khon, I decided to open a similar libraries on the tiny neighbouring islands Don Sang and Don Een. This was even more important, as many children finishing the primary school there, stop their education given lack of means to pay for a boat transport to reach Don Khon where the only secondary school in the region is located.

However, it was not that easy. In Laos it is very difficult to get quality printed books and smart games simply do not exist.  Moreover the hardship of working on the islands is that everything needs to be brought from far by boat.  Therefore I stopped on my way to Laos in Bangkok, where I could buy colourful, smart materials and games.  Luckily I have already also contacts and friends in Laos, so I managed to pre-order a box of quality books in Lao from an NGO operating in the capital that was sent for me to  a southern city - Pakse, where I could pick it up on my way to the islands.

This time it was also more difficult to get the wardrobes, as the local carpenters got a ban on unlicensed wood, so I had to order wardrobes and shelves from a city 140kms away. But those did arrived on time and the locals helped to load them into a boat. I went first to Don Sang, then Don Een. Once docked at the island, local youngsters came to help unloading the wardrobes and placing them in the classrooms, where I was to open the libraries.

I came loaded with bags full of Lao and English books, educational materials and games. The children on Don Sang were already waiting for me. Having entered the classroom I started some magic tricks transforming a wardrobe into a library, understandable words into sentences and stories making sense, empty papers into colourful paintings, pictures broken into pieces into animals, domino blocks into a snake… The kids were sitting enchanted with eyes wide open and did not let me go.

Finally magically disappearing, I headed to Don Een to perform my show again. This time, she made out of kids doctors, teachers, firemen, writers and astronauts, I conjured colourful fish in the pond and soap bubbles in the air. I organised various tournaments and when everyone knew how things work, I simply let each of them grab a book and read … Reading is dreaming, books are a uniquely portable magic and eventually these dreams can magically come true.

While investing in literacy, I kept on monitoring “WASH” (Water, Sanitation and Hygiene) part of my project. Next to checking on every bathroom and ordering necessary repair works, I added visual cues to enhance hands washing in Don Een and Don Som. Through all these years I realised that while it is not that difficult to build infrastructure, it is much harder to change behaviours. As the kids do not have proper bathrooms at home, hands washing is not seen as something natural.  So I use nudges - environmental cues engaging unconscious decision-making processes to prompt behaviour change. I hope that making bathrooms child friendly, adding few arrows and footprints at the sinks will make kids to wash their hands more frequently.

And when I was painting the arrows and tiny feet on the ground in Don Een, I heard on the background the humming of tens of quiet voices each of them reading a different story. I am sure they were all dreaming with open eyes and felt wonderful being able to offer these kids a way to expand their minds and fill up their hearts.

The kids on Don Som also immediately spotted me and run out of school. Starring at me painting was definitely more interesting than sitting in the classroom.  Half an hour later, when the bathroom was decorated with colourful fish and dolphins, I pushed all the kids back to the classroom and distributed rest of the books I had kept. However, they are still waiting for a fully fledged library...

Education is a passport to the future (March 2017)

Nelson Mandela rightly said that “education is the most powerful weapon, which one can use to change the World”.  Everything in “me4laos” project turns around education. Education is a passport for the future and I just want these Lao kids to have a future and a decent one. Since the beginning I was investing in education: teaching English, geography, hygiene, opening libraries. I also tried to monitor drop-outs from school, which led me to … saving life of one of my students…

Once Mouse* recovered from her disease I wanted to get her back to school. It was not easy, as parents got used to having the little one at home helping with domestic chores.  It took a while to convince them that it is really indispensable that their daughter gets back to school. Once I managed to convince the parents, it was time to talk to the school director. As at the time I went there, he was absent, it looked pretty gloomy.  However, having done tremendous effort to convince the parents that Mouse needs to continue education, I was not thinking of letting it go. Soon all the other teachers gathered while I was explaining over and over again why it is so important that Mouse gets back to school.  Finally, the teacher who helped me with anti-trafficking workshops few months ago, called the director and got an oral agreement over the phone.  I had just to ensure that Mouse has a school uniform, books and she could join the first grade of the secondary school.

So I took Mouse to the mainland, where we went to the market to shop for her new school uniform, copybooks and books. In the same time I talked to her father about the medical check-up I will organise for the little one in May following the e-mail exchange with the doctor in Vientiane.

On Monday I woke up very early to wait for Mouse to accompany her back to school. She showed up as agreed half an hour before the school starts. She had her new uniform on, her favourite pink shoes from Vientiane and hair neatly put into braids. She was all excited and looked so beautiful! I took her hand and walked her through the village towards the school. Some children passing by were surprised to see Mouse on her way to school, but the little one was proud telling them that indeed she was back. Few hundreds meters before the school gate, she stopped. Her heart was pounding from being nervous. I grabbed her shoulder and pushed a bit encouraging her to go.  Once we were approaching the school, other kids were already pointing fingers and shouting our names. We entered the school together and I walked Mouse next to the classroom of the first grade.  Her friends spotted her and circled Mouse around. Mouse started to smile and talk to the other kids. The nervousness seemed to fade away.  One girl took Mouse into the classroom and told to sit in the first row.

Once the bell rang, all the kids gathered around the flag. It is a custom that every Monday morning children sing the Lao anthem while the smartest of them pulls the Lao flag up. Then teachers make short speeches giving advise for the upcoming week. This time, the director asked me if I didn’t want to talk to the kids. I thought it was a unique opportunity to pass messages on importance of education. So once the directors stopped I started in Lao saying that studying is really important. Everyone listened, even the naughty boys, who never pay attention. I pointed how difficult Lao language is but that I study it very hard and hence as they see I can speak it better and better every time I come. Then I told them that English is as difficult but that they need to study it as I do with Lao. And if they do, they will be able to get better jobs, gain money and have better lives. I told them that in Europe there are many schools and that everybody studies hard because it is really important. Finally, I wished them all good luck in studying.  Once I finished they all started clapping. The applause was so laud that I hardly could hear my heart jumping from happiness. I would have never imagined giving a speech about importance of education in front of 200 young Lao students who all know me, a speech that hopefully will make a difference in their lives, because education is a passport to the future.


* the name has been changed to protect the girl's identity