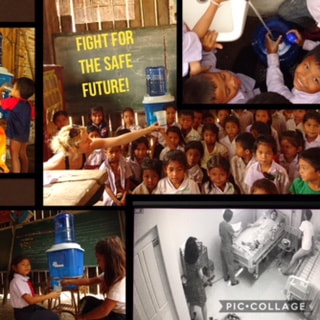 Water is a limited resource and a public good fundamental for life  and health. An adequate amount of safe water is necessary to prevent death from dehydration, to reduce the risk of water-related disease and to provide for consumption, cooking, personal and domestic hygienic requirements.

The human right to water is indispensable for leading a life in human dignity. It stems indirectly from Article 11(1) of the International Covenant on Economic, Social and Cultural Rights. The UN Committee on economic, socials and cultural rights stated that in particular “children should not be prevented from enjoying their human rights due to the lack of adequate water in educational institutions and households or through the burden of collecting water. Provision of adequate water to educational institutions currently without adequate drinking water should be addressed as a matter of urgency”.[1]

In the same time over one billion persons all over the World lack access to a basic water supply. Lao people drink very little water.  Clean, bottled water is expensive and water from the rivers or rainwater needs to be at least boiled, which requires time. Additionally in the remote areas, to cook water one needs to collect wood for fire, which in turn increases risk of snake and spider bites as well as burning down the household. Moreover, globally several billion of people, among those living in Don Khon in Laos do not have access to adequate sanitation, which is the primary cause of water contamination and diseases linked to water. Therefore my project initially focussed on bringing sanitation facilities to schools.

But as having access not only to a toilet and running water but to clean, safe drinkable water in Laos - country where Sun burns madly with temperature raising up to 50°C  in the hottest months-  is so important, I decided to  invest in water filters in all schools to help children stay hydrated. It not only can make them healthier but also less tired, thirsty and hence will make studying much easier.

Having tested already two filters last time, which proved to bring positive results (children in a school of Don Een are happy having access to fresh, clean water and the Little Girl has less health troubles cleaning her kidneys well) I ordered 20 water filters to install in each classroom. The company promised to deliver them to the harbour close to  the islands, hence the day after I arrived I got up very early to jump on a big boat and head to the mainland to pick them up.

I also used this opportunity to go 20 kms up north to a village where there is a “Brico” –like shop, where I got all replacement parts for the first bathroom that broke down. With all the filters, tanks and pipes, I went to the furthest island – Don Sang - to install filters and take the opportunity to give a class about the importance of staying hydrated. Whenever I get into a classroom I also try to sneak in some English and fun games.

The next day I had remaining 18 filters to install in all the schools on Don Khon island. I started at 8:00 when the schools open and kept on moving from classroom to classroom all day long, only with a tiny break.

It was an extremely rewarding exercise. Every time I  put up the filter, explained how it worked, how to maintain it and I also  taught about the importance of drinking of at least 2 litters of clean water. To make sure the children would understand I did it all in Lao using the opportunity to introduce couple of “water  - related” English words: “filter”, “bottle”, “glass”, “to drink”... All that in form of fun games. The kids as well as older students reacted great. Even if I more or less repeated 18 times my “performance”, it never has been the same. During a short break I was invited to the teachers’ meeting where I could instruct them how to clean and maintain the filers.

Having done all that during the first days, I could observe how teachers and children started to use them. It was truly heart warming to see each school day starting with cleaning and refilling the filters, which then provided water for all kids who were studying in extreme hot weather.

I equally enjoyed seeing how the family of the Little Girl maintained in a perfect condition their filter, how the Little Girls would fill up her water bottle each morning to take fresh water to school and how her younger brother kept on drinking water from the filer fountain …

This led me to held a meeting with an island chief to explore possibilities to deliver 100 filers more. I want to offer those filters to the poorest families. We discussed the criteria and the chief promised to come of with a list of potential beneficiaries. If all goes well, next time I will be able to change life of those most in need making sure that water filters are installed in all households , which lack access to clean and safe water. And as safe water saves lives, such objective makes it worth to keep on fighting…

Next to the individual beneficiaries, there is also another tiny island - Don Puay. I keep on being amazed that each time I travel to South Laos, I discover new islands. Don Puay is not too far from Don Sang and is very small. Just next to a tree where the boats dock, there is school and even a toilet. However, the toilet misses a sink and running water, which I would like to add. Once there is a sink and running water, I will be able bring in a filter.

I visited Don Puay on a hot, Sunny morning. To introduce myself to the community, I gave a short English and geography class ending by blowing soap bubbles, which made the kids scream from happiness. I am convinced that bringing  there running water and a filter that can make it safe to drink, will improve lives of these kids and make their future better…

Fighting for their safe future

During my last visit and the examination by the doctors of all children on the island, two girls were diagnosed with heart problems. Noita* -  a girl of 6 and Miku* who is 12 years old were still waiting for an appointment with a cardiologist. I finally managed to reach their families, put them in touch with the interpreter and doctors and explain the way how their travel to the clinic in Vientiane will be organised, so that the small ones can see a cardiologist, who will make sure that all to secure their healthy and safe future will be done.

*the real names were changed to protect the girls’ identities

This visit was also very special as I got to know Noy* - a 22 years old girl, who was diagnosed with a cancer and who had to be operated to remove a tumour from her arm.

Noy was born at Don Khon, island where I work. Her family catches fish, grows their own sticky rice and harvests coconuts. They have no steady income and live together with nine people in a house, including Noy’s oldest sister with her husband and their one-year old baby.

At 13 years of age, Noy was working at the nearby guesthouse, spending there 17 hours a day. It was where Kim – a Danish friend, who like me travelled one day to Laos – met her and thought that instead of working, this small girl should go to school.  He found her family and started to support them financially, so that Noy could go back to school and continue studying to have more options for the future.

Few years ago Noy moved to Pakse, a city 140 kilometres north, where she started university. She studied IT, accountancy, English and math. This is extremely rare as most people from that area in Laos only get to finish secondary school and maybe three years of high school.

However, when the tumour started to grow and the pain become unbearable, she had to stop her studies and moved back to Don Khon, where her family took care of her. Again, thanks to support of Kim, Noy could travel to Thailand to a hospital, where the tumour was removed but now Noy was in urgent need of chemotherapy treatment to avoid that the cancer spreads.

I sent all the medical documentation to my befriended doctor in the Vietnamese clinic in Vientiane, the capital city of Laos. It is not a cancer specialised clinic (which simply does not exist in Laos), but Dr Phuc sent Noy’s results to his Dutch friend – a cancer specialist, who consulted them further with an Israeli expert and following all those analysis, the three doctors agreed on a necessary treatment, found medicines that could be imported to Laos and decided to receive the girl in the clinic in Vientiane. I offered further my support, spent much time with the family discussing the upcoming fight for life…

Noy accompanied by her older sister and Kim said goodbye to the family and left the island when I was still there. After an initial examination, Noy was confirmed with the wing sarcoma (or in modern terms Primitive NeuroEctodormal Tumor = PNET). Unfortunately, the primary tumour was not radically resected in Thailand, so she had to start chemotherapy immediately. She needs 6 cycles of the treatment every three weeks and eventually consolidation radiotherapy.  The cost of each cycle is over 1000€.  But according to the doctors, as Noy did not have metastases, the probability of cure is above 75% .

Once treatment is over Noy will start school again. She only has one semester left to finish the university. If she survives the struggle against the cancer that will give her a lot of opportunities

Thank to the fund-raising at my farewell party in DG HOME, I could commit to pay two cycles of the chemotherapy. One has already been finalised. Kim will pay another two. Noy’s family borrowed money for the fifth cycle and we will all look for further sources to give back Noy her future!!!

*the real name was changed to protect the girl's identity
Donations for Noy or for bringing water filters to the poorest families in Don Khon and the running water and installing a water filter at the school on Don Puay can be made at the following bank account opened under my name : IBAN: BE32 1030 7215 1702 BIC NICABEBB..
Thank you, ຂອບໃຈ (kop jai)!