"Me for Laos", the life changing project...

In 2010 I went on holidays to Laos. I travelled from the North to the South, until I reached Don Khon - a remote, tiny island on the Mekong river, which marks there the border between Laos and Cambodia and ... which changed my life.
Back then, while visiting the island, I spotted a school and sneaked in to the classroom. There were many children but not enough teachers and no one spoke English. It was then that the idea to do something more came to my mind. It grew steadily and then one day I decided I need to come back to Laos. I started studying Lao to be able to explain who I was and what I would like to do. I collected world maps from DG DEVCO, copybooks, crayons and pens with an old JLS logo and sent them all by diplomatic pouch to our Delegation in Bangkok. And eventually in March 2013, equipped with all the EU material  and much energy, I just showed up again on Don Khon.

When I approached the teachers for the first time, they looked at me suspiciously, but when I started to explain them in my very basic Lao that I came to help, that I can teach English for free, they seemed to like this idea. I was invited to start as of Monday. Then walking a bit further, I spotted another school, which I hadn’t seen three years ago. So I decided to ask there again if they don’t need additional teacher. And so I ended up teaching in two schools. In the morning in the first one, in the afternoon in the second one. It was a life changing experience, not only for the kids but mostly for myself. I became a part of the island, of this small but amazing society… It was hot and hard to work, but all of it was extremely rewarding.
But it was only holidays and eventually  I had to go back to Brussels, but knowing that I can continue to support these schools even from far.  It has just happened that I was changing jobs so instead of another standard farewell present I decided to use the opportunity to ask the colleagues to help me supporting "my  Lao island" . The feedback I got was amazing. More than 100 people showed up at the non-farewell drink dedicated to fund raising for the construction of a toilet at "my" Lao school..

The words of appreciation and donations largely overcame my expectations. And in Laos every euro counts, so the efforts allowed me to continue my personal project. It has not been easy..... New life circumstances, the distance,  facing again the Lao reality, all made it hard but eventually thanks to an amazing person, who I met in Laos and whom eventually I decided to trust, the project kicked off...

First there were just drawings, then Thai friends prepared professional designs...The school director was delighted, finally we got also approval from the island's authoritiers, found a construction team, signed the contracts.. All, not without additional hardship, the remoteness of the island blew up the costs, all materials have to be brought from the mainland, we had to rent a boat for that. But thanks to all of you and also to unexpected spontaneous help of Thai friends, the project was going on well and the everyday progressing slowly...

(pictures below by Piyavit Thongsa-Ard, a photographer who is currently on the island helping me, while I'm far away)
In June the last phase of construction started, even if the process slowed down due to heavy rains, but thanks to additional help it was possible to install also the sinks and a water tank.
when the construction was finished... it was time for the rain season to end  - for me to come -  to drain the last part of the ground in order to connect the pipes and to make it operable...
BACK TO THE ISLAND TO FINALISE THE PROJECT

October/November 2013
It took me six months to come back, but in the meantime so much has been done. Now it is the moment to finalise the project. But in Laos things are never easy. My Thai friend, who managed the works, had to leave Laos and given his involvement in defending the rights of fishermen impacted by the electricity dam project, he cannot come back. My Lao language skills are improving, but I had to find somebody to help me – all in all – I have never seen the construction team which started the work on the island and never managed any construction site even in Europe.

What I had was the contact details of the foreman of the construction team and a befriended retired Lao owner of a guesthouse in Pakse, 100 km up north from the island.  However one needs to know that Mr Vong speaks fluently Polish (as he spent there nine years in asylum), French, English and of course Lao. He runs the most famous hostel in Pakse, organises guided tours and with help of a Polish-Flemish couple from Antwerp builds a school in one of the poorest area of Southern Laos.

2 November 2013,
When I arrived in Pakse, Mr Vong was so kind to call the foreman, to discover that actually he was in town and within 15 minutes we were all sitting together and   negotiating in Lao  the details of the final stage. The foreman turned out to be incredibly nice person; everything went perfectly: contract for the final phase was signed, first batch of final payment was done and so was the picture of a handshake. The next appointment was set already in Don Khon and plans were made to be ready very, very soon!

4 November 2013,
...and so it went as planned. While I was back in the school teaching, outside the classroom workers were building the toilet...

Life is magical, everything can happen if one really wants it and is stubborn enough to pursue the dreams. Thank you all once again for helping this all happen!

5 November 2013 - IT IS DONE!
And then the day of finalizing of the project came. The foreman was closing the well, putting concrete under the tank and meanwhile my sister was developing the mural painting. She made the design, which I loved and so once the kids disappeared in the classrooms, we started cleaning the wall and sketching.

During the break the kids gathered all around the wall and my sister involved them immediately. They were delighted to hold the brush and fill in with white paint the whales drawn next to the sinks.  And by the lunch it was all finished. I had still the final meeting with the foreman for the technical acceptance of the site and the final payment, confirmed by the last receipt drawn up in Lao. There were also words of appreciation from both sides and the final handshake.

I still can’t believe it all happened, that I managed to start the construction works being soo far away in Europe and that once I returned for a week only, I managed to finalise all within three days. But all this is because of all the amazing people around me: my family, friends and locals I met.

First of all huge thanks to all my friends and colleagues, who gave me an amazing amount of trust and supported the entire project. But if not my Thai friend – Tan, the photographer - who I met on the island six months ago, I would never be able to start. Then it must have been a destiny that when I came back, the foreman was in Pakse where I stayed at Mr Vong’s hostel. I also met Mr Vong a half a year ago and have stayed in touch since then.. And finally my little sister – my best friend and my best travel companion. It was with Ania, I visited the island three years ago. It was with her I discussed back in Brussels the plans to go back, it was my sister who helped me organizing the fund raising event back in May. Finally now, it was Ania, who got an idea of making the mural painting on the toilet’s front wall. And then one also needs to give credit to the locals at the island, Visai – befriended owner of the nearby guesthouse and the foreman Sang, whose determination to finish the project on time allowed to inaugurate the toilet while I was still on the island!

6 November 2013 - HAND WASHING SAVES LIVES
One thing is to build a toilet, but other thing is to teach the kids how to properly use it.  Keeping hands clean is one of the most important ways to prevent the spread of infection and illness. The statistics say that hand washing with soap at critical moments reduces the rates of diarrheal diseases by almost 50% and some other respiratory diseases by 30%. Therefore I prepared a class about hand washing. I brought a soap and a towel, taught the kids a song about washing the hands with soap and water and finally I took  them all to the sinks for a small demonstration. It seemed that some kids have never washed their hands with soap and running water. Their hands were so dirty, but they were rubbing and scrubbing them like crazy.

But there are still so many things that can be done...  the rainy season means also more mosquitoes appear bringing dengue and malaria. The only hospital on the island can't handle the number of kids admitted. With not enough beds for overnight patients, limited amount of medicines, my heart breaks seeing my ex-students suffer...... therefore I decided to keep the account open and launch a call for support again... for those who asked me whether there was still time to partcipate... 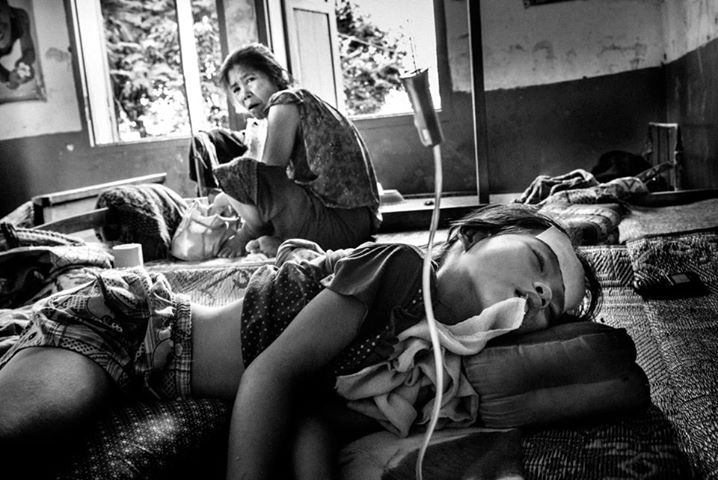 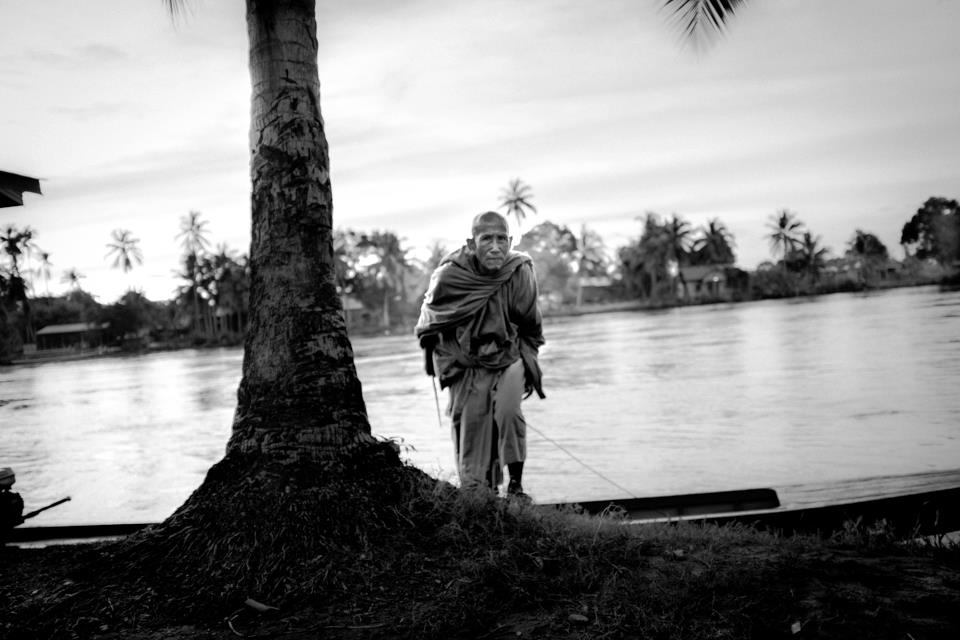 the monk praying for luck of the families in Don Khon. © Piyavit Thongsa-Ard
If any of you wants to help further, you can donate your contribution at the following bank account opened for this cause on my name IBAN: BE32 1030 7215 1702 BIC NICABEBB. It will stay open as I plan to continue my efforts to make this world better.